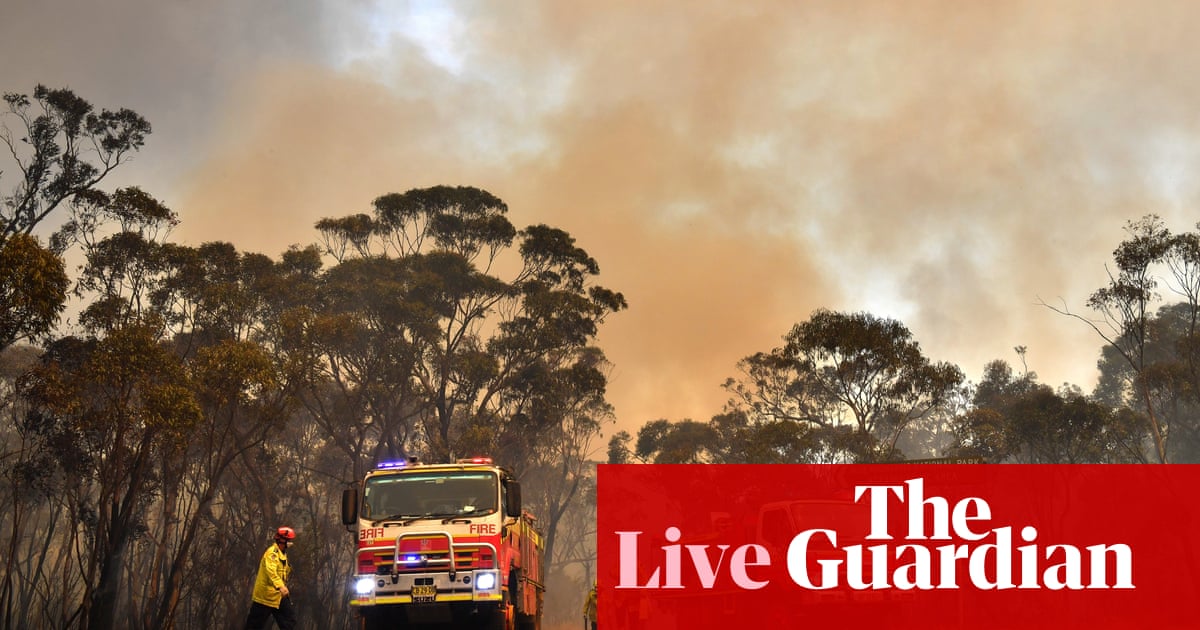 Industry groups are calling on the Victorian government to reduce greenhouse gas emissions but also to ensure a fair transition for workers in those industries.

“Climate change poses a major threat to the Victorian community, economy and each of the sectors we represent,” the policy reads.

“Victoria is already living with the impacts of 1C of warming above pre-industrial levels, causing more frequent and extreme droughts, bushfires and heatwaves.

They call on the Andrews Labor government, which has already set a target of net-zero emissions by 2050, to establish an independent authority to lead the transition.

Decarbonising the energy sector – the biggest contributor to Victorian emissions – “will inevitably be a priority” but should be balanced with job creation, the policy states.

Support should also be provided to communities, organisations and businesses to build resilience and adapt to new weather extremes and climatic conditions.

A man and a woman were burned fighting fires in regional Queensland on Tuesday afternoon, AAP reports:

A man in his 50s received burns to his face, neck and arms while battling a blaze at Lowmead, in the Wide Bay region, north of Brisbane, on Tuesday afternoon.

A 60-year-old woman at the same property has burns to her face and airway, and another man in his 50s suffered respiratory problems.

All three were taken to hospital in a stable condition.

Firefighters have been working overnight to try to contain the fire in Lowmead, which is part of the bigger Mount Maria fire.

On Wednesday morning residents were ready to leave if conditions worsened, and some who had evacuated are not yet allowed to go home.

That fire is burning in a south-westerly direction towards John Clifford Way.

The Queensland Rural Fire Service has also issued prepare to leave warnings for the communities of Promisedland and Pine Creek, south-west of Bundaberg.

Residents of the three towns have been told to go to the evacuation centre at Miriam Vale’s community hall, or towards Bundaberg if they have to leave on Wednesday.

Much of Queensland will suffer a heatwave for the rest of this week but the worst is expected in the state’s interior.

The NSW premier, Gladys Berejiklian, has urged residents to consider their travel plans over the Christmas period, particularly for those visiting fire-affected towns that have only one road in and out.

“We’ve received a briefing also from the Bureau of Meteorology who indicate that not only are we going to experience very high temperatures on Thursday and on Saturday, but … exceedingly very concerning wind conditions … wind fronts that are going to escalate the fuel, or escalate the fires burning.

“[There is] also the potential to have spot fires and embers travelling very long distances because of what has been described to me as turbulent wind conditions. [This] is going to mean very unpredictable fire conditions.” he said.

The weather bureau says the temperature is set to hit 39C in Melbourne on Wednesday and Swan Hill, in the state’s north-west, is expected to reach 43C, AAP reports:

A severe fire danger warning has been issued for the Wimmera which is under a total fire ban.

“With dry, windy and close to 40-degree days predicted, we want everyone to be alert to the symptoms of heat-related illnesses,” Ambulance Victoria’s Justin Dunlop said.

“This heatwave is likely to continue on and off over the coming weeks and we have made sure we have adequate clinical and support staff available to provide the appropriate level of care and response.”

Residents are urged to check on their neighbours, infants, the elderly and expectant mothers who are some of the most vulnerable in this heat, Dunlop said.

Metro Trains and Yarra Trams will closely monitor conditions throughout the day to ensure commuters get to their destination. There are no planned service changes so far.

Drivers should check their vehicles as breakdowns are more likely to happen in extreme heat, the transport department warned.

Three people have been burned while fighting bushfires in Queensland, AAP reports.

Two men and a woman were injured at Lowmead, in the Wide Bay region, and were taken to hospital in a stable condition.

On Wednesday morning residents were ready to leave if conditions worsened, and some who have already evacuated are not yet being allowed to return home. The fire is burning in a south-westerly direction towards John Clifford Way.

Here’s how hot it was in Adelaide. The coolest it got overnight was 28.6C.

There is a total fire ban across the whole of NSW today, for four days.

There are fire bans across eight South Australian districts, in the south and south-east; along the Queensland coast; and one in Victoria (Wimmera).

“There is still an element of unpredictability, which is what concerns us,” she says. “Given the heatwave conditions on Thursday but worse on Saturday, we need everyone to be alert and mindful of the conditions.”

Police and emergency services minister David Elliott adds: “The biggest risk to the people of New South Wales over the four days is complacency.”

And fair play to their radio colleagues, who were also evacuated, and had to be a bit sneakier about it.

Yesterday, the bushfire smoke was so thick in Canberra it set off the fire alarm in the ABC’s Dickson studio – a few minutes before the 7pm news.

Undeterred, anchor Dan Bourchier and studio crew set up outside the building and broadcast from there.

The lead item that night was, ironically, the smoke.

“This appears to be becoming the new normal,” Bourchier said.

Good morning. Welcome to day three of this week’s coverage of the bushfire crisis and heatwave.

Today, we’re at the start of an extreme, national hot spell, coast to coast, that could smash all kinds of records.

There’s a good chance the record for Australia’s hottest single day could be broken – either today or tomorrow. It currently stands at 40.3C, set in 2013. That’s for the average maximum temperature across the country.

It’s forecast to hit 42C in Adelaide – the start of four days above 40C. Inland, it could be as high 47C in Oodnadatta and Port Augusta; and 43C in Alice Springs in the NT.

In Western Australia, it could reach 46C at Marble Bar and 43C in Kalgoorlie. In Queensland, Birdsville could reach 47C.

Stay with us for the latest heat and bushfire updates.

Cooperation between Azerbaijan, Georgia and Turkey brings significant results in positioning of region

A Flash In The Distance